You are here:
Interviews and small talks 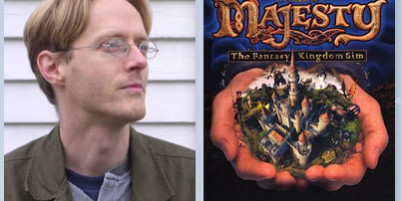 This Interview with Jim DuBois on Majesty (Fantasy Kingdom Sim) is to go along with the main article on the game, which I recommend reading before diving into this.

– Hello Jim and thanks for being available for this short interview! I have read on a website that you got the mail idea for Majesty while playing The Settlers. Can you confirm and elaborate on this?

Jim: Yes, I was playing The Settlers, and watching one of the workers going fishing, and noticed that I started assigning thoughts and personality to them, even though I knew they had very simple algorithms behind them. It made me realize that part of what happens in complex games with automated parts is that the player makes up models in their own mind of what is happening behind the scenes, and that these aren’t necessarily accurate, but are a very interesting and complex part of playing. The stories that you tell in your head about what happens in a game are interesting and as important as what actually happens in the game. Especially so in complex simulations, and games with lots of automation.

– I definitely agree with that. On that topic, the same website states that the original idea for the game dated back to ’96 but we know Majesty came out only in 2000. Were there some delays or problems that slowed down development? Care to share some stories about it?

Jim: We worked on it for all those years, and had a variety of publishers along the way who bought it, then dropped it or went out of business, and we had to take our in-process version around to try to get it picked up by a new publisher. The only ones I remember were Ripcord, which went out of business, and Hasbro Interactive, which published it (and then went out of buisiness later). I think there was another one in there too. Iremember flying to different companies to try and sell Majesty to them. Some who we didn’t end up working with included the guys who made Command and Conquer, and the company who made Age of Empires II.

– So it was a long road, but was there a point when Majesty was fully developed but you still had no publisher?

Jim: It is hard to say when a game is fully developed. We kept developing Majesty right until it got published. And if we had more time it would have been more developed. So every time we lost a publisher it let us make the game better.

– Yes, that’s also true, but do you think things would have gone differently had the game been released before 2000?

Jim: If we had released the game earlier it wouldn’t have been as good or complex.

– Was there anything you would have done differenly in the game or didn’t implement for time or technological costraints?

Jim: We continually passed over ideas we had because of time and technical constraints. It is part of development. I can’t recall details of them any more however.

– Moving on, Jim, you also worked on Heroes of Might and Magic 2, along with the Beyond the Dark Portal expansion for Wc2. What did you learn while developing those titles that inspired you in the making of Majesty?

Jim: In Beyond the Dark Portal, I decided we should put in the hero units, and that is sort of a predecessor to the heroes in Majesty. But it is really because I am an old AD&D player. One thing that directly came about from playing so many games of Warcraft II was the great desire to not have to micro-manange all of my units. The computer is so good at automation it seemed like I should be able to take advantage of that. And automation helps you manage more complex simulations, such as Majesty. Other than that, I got good practice at designing and tweaking interesting levels.

– It was definitely a unique game. Do you ever hear from Majesty fans still playing the game, except for me obviously?

Jim: Yes, a few times a year someone will send me a message saying, “Are you the Jim DuBois who worked on Majesty?” And I will have a brief yet good contact with them. It is very gratifying to have made something that people still enjoy and play, as well as to have had it influence their lives in an earlier time. Last year at my house we had trouble with the boiler. There was soot everywhere, and we had to have a professional cleaning crew in to clean up. I was talking with the manager, and said I used to make computer games. And he had played and loved Majesty, so we had some fun conversations while he was here. He bought a painting of mine and a copy of a board game I had published, Vampires vs Unicorns. I signed them, “from Jim DuBois, the creator of Majesty” and he was very happy.

– That’s really nice! Oh, by the way, I have to ask: were you involved in anyway in the making of Majesty 2?

Jim: No and I never played it. Cyberlore Studios sold the rights to another company who developed Majesty 2.

– And now, moving on to the present day: I know that Arcane Journeys, your website, was created mainly for Palm OS games you were developing, then you also branched out into card games (like Advance Tactics). So, Majesty was, as far as I know, the last team developed PC game you were involved in. What was it that made you quit the scene and start getting into different systems?

Jim: There is a complex answer to that. Many things. 1) I didn’t like being a professional. I am very creative, and fit more into Research and Development type of work, rather than production oriented work. I didn’t like the very heavy work schedule at the end of the project: 16 hours a day, 7 days a week to make the deadline. 2) I had conflicts at Cyberlore Studios about work and money, so I quit working there. 3) Over time I wanted to make things that didn’t rely on computers and the latest OS and such, so that they had more staying power over time. I am working on a publisher with a board game at the moment. What I like about board games is that they are not on the computer, you get to sit around with other humans and interact, and you can pull them off the shelf 30 years later and they still work! 4) When you are on a production schedule with money coming when you hit deadlines, there is not really any time to try new ideas, and experiment with design, which is something I like to do, so when I made my website, it gave me a chance to do that, which really let me develop my design and analysis skills in a new way.

Thank you very much Jim, as a closing question, is there a game, even after 2000, that you’ve played that you wish you could have worked on?

I love Minecraft! Would be fun to do design work on it.

The History of Idea Soft and the origins of Screamer
October 1, 2022

The History of Genias Software – the G in inGenious
February 11, 2022