You are here:
Game Design VaultInterviews and small talks 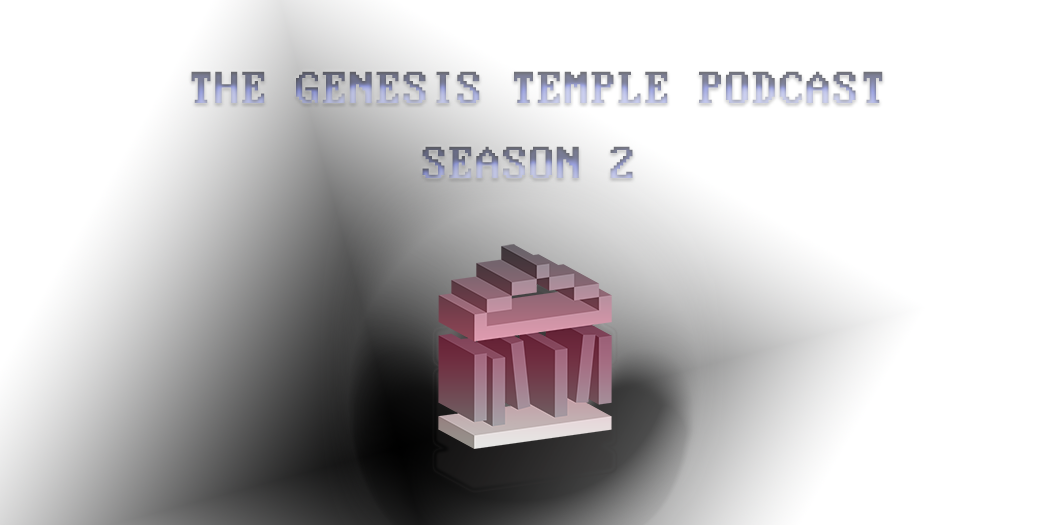 Since the first season of the podcast seemed to be appreciated by many people, I decided to soldier with The Genesis Temple Podcast season 2! I really did not expect to be able to talk to so many people that I had been following for a while. I think that, overall, I improved as a host (well, if just a little!) and I managed to interest more listeners by covering many topics that Season 1 just came a little short of.

As a reminder, I’m also doing an exclusive podcast on my Patreon called “Bits of Game Design” where patrons get to decide which games I’ll be talking about, with short 10/15 minutes episode where I talk about the design and history of an old and relevant (hopefully!) title. Otherwise, if you just want to support the show and the project, you could think about offering me a coffee.

In the first episode of the Genesis Temple Podcast season 2, I spoke with journalist and games writer Richard Cobbett about his experience in writing for Failbetter games, his current work on Nighthawks and, especially, how to completely turn around our way of approaching and thinking about supposedly “bad” games.

A Mediterranean get-together of sorts as Greece and Italy meet. With Konstantinos we chatted about the early gaming industry in Greece, how to design a city in games and a whole lot of horror and Lovecraft as well. It is not Halloween, but we always love to talk horror. Check out Konstantinos’ book, Virtual Cities.

Episode #12 - Jack King-Spooner (Will You Ever Return, Sluggish Morss, Blues for Mittavinda)

In what is the most freeform episode yet, with indie developer Jack King-Spooner we ponder about the nature of games, their weirdness and his inspirations for all that fascinating peculiar stuff that he puts in. Along the way we stumble upon various topics, such as politics and fascism, and what about a game based on sex trafficking in Austria?

Lovecraft, gone but not forgotten, as together with game designer and writer Agustin Cordes we discuss about his experience with the Providence writer, along with his early gaming influence and growing up in Argentina. Along the way we also, naturally, discuss Scratches and its Director’s cut, along with touching upon the failed Kickstarter of the Case of Charles Dexter Ward and look forward to the release of Asylum.

In this very Swedish episode, I speak with Oskar Stålberg about his ideas on game design, his inspirations (Scandinavian and beyond) and his experience on marketing. We also discuss his years in studying as a programmer and how difficult it might be to think of a possible education model for an indie developer. Also: games as “toys”.

I had the pleasure of chatting with Florent Guillaume, creative director of Dontnod entertainment, about how the games we play as a child shape our imagination (and his original childhood plans for a sequel to The Legend of Zelda!), the role of a level designer in shaping the narrative of a game and his work on many of Dontnod’s important games, along with how the company can help improve things in the current gaming world.

A very cheesy, tomatoey and gooey pizza centered episode, as me and adventure developer Yann discuss his adventure games inspirations, the life episodes that would go to inform the narrative in his Inspector Waffles adventure and, of course, a whole lot of pizza: from Naples to Rome.

A very pleasant talk with Jess Morrissette about his years spent with the Sierra games, toxic gaming culture throughout the 80s and 90s plus a possible approach for a game writer in writing sensitive topics, like the correct usage of content warnings.

This was the beginning of the new podcast format going live which, starting from Episode 2, was made exclusively available for “Columns” patrons. “Bits of Game Design” is a series of short (10-15 minutes or more if the topic deserves more scrutiny) weekly podcast episodes centered on classic, and less classic, games, with a quick but in-depth look at their game design and mechanics, to  find out what is still relevant today along with providing, hopefully,  some food for thought. A weekly poll lets Columns patrons decide which game I shall cover in all future episodes.

Together with Stephen Kick of Nightdive studios we take a quick look back at some of the FPS that made us fall in love with the genre as kids, before diving head on into the work around the titles released by the company, touching upon the issues with game preservation and possible ideas for future remasters.

I welcome Dave Gilbert to the podcast to pick his brain about adventure games and nostalgia. We touch upon the birth of the Adventure Game Studio  community, the role of Wadjet Eye as a publisher and also get pleasantly derailed talking about voice acting in games and directing voice actors.

New Zealand and Sweden come together as I welcome Dave Oshry to the podcast. He is one of the hardest working people in the gaming industry today and we talked about his first contact with the FPS genre, his work on the Rise of the Triad reboot, learning to work as a video game producer and what really makes a “boomer shooter” special.

Quite the pleasant talk with narrative designer Ben Gelinas on the beauty of writing small details for characters in games from AAA like Mass Effect 3 to small indie visual novels like Speed Dating for Ghosts. We also talk about collecting physical games and dwell into a whole forest of obscure titles.

I discuss with game designer/writer Xalavier Nelson Jr. the beauty of living in the brainspace of a different world while playing a game, the importance of “choices matter” along with consequences and the way the games we play as kid shape our roles and work as adults.

In the final episode of The Genesis Temple Podcast season 2, I go back in time with writer/producer Richard Moss as we discuss the 80s/90s in playing on an Apple computer and – naturally – the shareware years: where did shareware come from, how did it fade and the different experience between Europe and the United States. Along the way, we also touch upon demo discs nostalgia.

The State of Things – the Genesis Temple’s third anniversary
December 5, 2022

The History of Idea Soft and the origins of Screamer
October 1, 2022