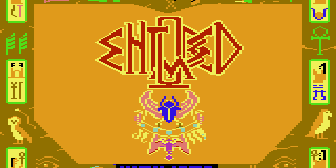 Trapped in a sprawling Egyptian tomb, oxygen constantly running out, stalked by monsters and creepy crawlers after my blood constantly… Wait, is such a game appropriate for a child?

Well, it sure was for four-year-old me! I loved that feeling of being endlessly stuck in a dusty suffocating sphinx full of sarcophagi and snakes, desperately searching for a way out, magical shields constantly running out. While I had never played any other game in the Pendragon series before, Entombed was the perfect introduction and the first one I wanted to write about.

Entombed is the second action-adventure title in the Pendragon series, following the Lovecraft-inspired The Staff of Karnath. Even though the levels were bigger, Entombed’s design was slightly simplified from the original: gone is the rather complex spell system, instead now the protagonist Pendragon attacks enemies with a whip, Belmont style. The layout of the sphinx is divided between corridors and rooms: the first are basically action sequences where the player has to defend Pendragon by slashing or jumping around. There are four basic types of enemies to be found in the corridors (mummy, scorpion/basilisk, fat fly and thin fly) along with some birds that will sometimes provide health (or rather, shield) pickups.

Despite bigger levels, Entombed‘s design was slightly simplified from the original: gone is the rather complex spell system, instead the protagonist Pendragon attacks enemies with a whip, Belmont style. The layout of the sphinx is divided between corridors and rooms: the first are straightforward action sequences where the player has to defend Pendragon by slashing or jumping around to dodge enemies’ attacks. There are four basic types of baddies to be found in the corridors (mummy, scorpion/basilisk, fat fly and thin fly) along with some birds that will sometimes provide health (or rather, shield) pickups.

The rooms are usually where the adventure part of the game will unfold, with puzzles to be solved, along with, sometimes, enemies to defeat. While the puzzles are generally not very difficult, involving idols or keys to collect along with symbols on walls to activate, most of them are still rather obtuse, as was the case for many classic home computer adventure games. For example, some statues or doors will not move or open without an item to be found in another room or, even, on a previously visited level. Which item would that be? Well… no clues are given.

It is possible to find scrolls containing precious hints, but most of the time, the player is left in the dark as to what the item required to progress is. Naturally, keeping a map (a physical one) is definitely recommended. The player controls Pendragon by moving him around in the 3D environments, with “space” on the keyboard used to change the selected action and the fire button to execute said action. The interface is overly simplified but well designed: a single line displaying the time spent in the room, oxygen left, level of magical shield and the currently selected action. Speaking of being left in the dark, except for the whip, the only other item available is the torch, obviously useful to light rooms.

Graphically, Entombed drips with atmosphere; the changing colors of the rooms were a smart design idea to avoid the player getting lost too easily. I especially like the level of detail corridors and rooms have: while it might be not very “historically accurate”, it does its job in bringing the thick, disquieting atmosphere of an Egyptian tomb. Unfortunately, the sound department is not really of note, with the game being mostly silent except for a few sound effects. This of course adds to the atmosphere, but being a fairly long adventure, it could have used at least some low-level white noise in the background.

The programmers behind Entombed, along with the other titles in the Pendragon series, remained a mystery for many years, since all of the games have no end credits. It was only in 2008 that, thanks to a small clue, it was confirmed that the developers were brothers Dave and Rob Thomas, which were also responsible for the great conversion of Buggy Boy. Both had been designing textual adventures since the early 80s but wanted their games to be something more than just screens of text.

They ended up showing a prototype of the Staff of Karnath to the Stampers brothers, founders of the studio Ultimate Play the Game, responsible for many Spectrum classics. Even though the company – which later became Rare – was, back then, almost fully dedicated to Sinclair’s home computer, they decided to hire the Thomases, allowing them to start developing the Pendragon series on Commodore 64. Entombed, says Dave Thomas, was the longest to program out of the whole series because the graphical engine was rewritten and overhauled to better fit the sprawling corridors and rooms of the sequel. The style and gameplay were meant as an homage to the Indiana Jones series.

Released to mostly favorable reviews, Entombed is still pretty engaging to play, clocking in at a couple of hours, or 30 minutes for a quick run-through, with no available save feature or password system. The only thing that doesn’t hold up to present scrutiny would probably be the corridor “action” sections, since they tend to get repetitive pretty fast: a problem that the Thomas brothers would go on to address in the sequel, Blackwyche.

Despite the sequel being, perhaps, the better game, Entombed remains the most immediate of the Pendragon quadrilogy. Few games from the C64 era can boast to have aged this gracefully, with a great atmosphere, rather complex but ultimately entertaining puzzles and decent action sequences. If one is looking to get trapped in a sphinx and slowly die of oxygen starvation, well, look no further for a mighty efficient simulation of that experience.

Thank you for reading.

If you would like to support the project, you can do so by joining my Patreon or offering me a coffee.

The State of Things – the Genesis Temple’s third anniversary
December 5, 2022