Indie Game of the Week – Pilgrims 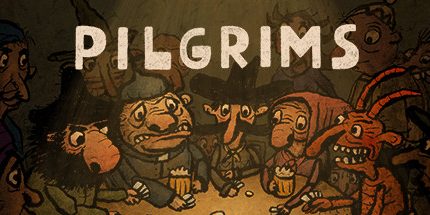 Amanita Design is a familiar name for many adventure games fans, the Czech studio has been around since the early 00s, even though they only recently managed to break through to reach a bigger audience.
Machinarium, one of their biggest hits, has been a clear inspiration for their recent adventure games, even though the studio seems to even better when it tries different things, in particular games designed for mobile experiences like Apple Arcade and Android.
Pilgrims may look and play like a simplistic mobile adventure but feels like reading an ancient russian book from the 19th century.

Designed by Jakub Dvorský and his team, the idea came from a mini-game found in Samorost 3, furtherly expanded on by way of using Czech fairy tales tropes and characters.
Deck building is a mechanic that seems to be fashionable lately, so why not create a deck building adventure game?
While playing Pilgrims, the player shall unlock new characters and objects in order to progress through the story. That is, if getting to the end is one’s only concern, but not really something I would recommend since a single straightforward run would result a pretty short experience. Instead, Amanita’s design gently nudges the player towards experimentation; as a take on the well known “try everything with everything” trope from adventure games, it is pretty refreshing, leading to some unique and funny consequences.
In one scene an evil old hag ends up with her eyes ablaze and then crawls away on the ground, her eye sockets empty.
Naturally, PIlgrims is designed to be as immediate as possible: in each scene the player chooses which character card to “play” and, subsequently, which object to throw in the scene.
Of course, other characters’ reactions and results vary depending on the single main chard chosen, unfortunately it is not possible to put everyone into play at the same time.

Since this is designed to be a mobile game first and foremost, the controls are very simple, but that also means the charm of leafing through an old picture book is perfectly replicated.
A small detail I love to death is how the angles of each picture look old and slightly creased, like gently worn by time. It’s that small attention to details that makes the Czech studio one of the best in the business.
The sound design follows a similar footprint, with what sounds a made-up language that will inspire a smile or two… except it is not made-up! It’s actually Czech, for the most part. I have nothing but praise for a game that uses its original language, transforming it in a ingenious design feature. The folkish/rock soundtrack by Tomáš Dvořák is also pretty good on its own.
Playing Pilgrims is not very far removed from watching a weird 70s cartoon, like Fantastic Planet, especially because of that sinister “adult” vibe that makes the game better suited for adults rather than children. But, then again, that is Amanita Design’ trademark for most of their titles.
Still, even with all those good things, I still think Pilgrims could have been something more.
Since there’s really two main characters in the game, it would have made sense to write two separate stories, a good way to make the adventure more varied, even without artificially prolonging the experience.
As it is, the player will have seen basically everything in little more than an hour, there are a full 50 interactions/animations to unlock but those are just that, a small bonus which is not gonna prolong the game’s length that much.
It’s just that the art style is so spot on and everything so whimsical and funny that see it end so quickly, well, it is a bit of a letdown really.

Those looking for a weird, quirky, short adventure game which perfectly uses the deck building mechanic as a basis of narrating a peculiar story of paying back a gambling debt, will probably have to pause at Pilgrims and not look any further. It offers little more than an hour of entertainment, sure, but then again it costs like a cheap movie ticket.
Amanita Design confirm their great talent for art design and interesting – if a bit shallow – gameplay.
Get your tablet, sit in front of a fireplace, cross your legs and let the game take you back in time and to another world.

This is me just every day basically

I am very excited to present the trailer for my latest game...
🖋️ INSCRYPTION 🖋️

📜 And... if you feel so inclined, you may now inscribe the game upon your Steam wishlist. https://bit.ly/2XQDTRA

Entombed was one great adventure on #c64 and one of the best in the Pendragon series by the Thomas brothers. Did you know that it took 20 years to find out who the developers were? And that Ultimate Play the game later became Rare? #commodore https://bit.ly/entomb1

I tweeted about Spielberg's director chair a while ago and, lo and behold, the great @molleindustria actually ripped footage from the game, creating a real time interactive movie experience. Choose your own favourite level of Tarantino overacting! https://molleindustria.org/directorschoices/

Vidiot by @GZStorm is one of my favourite indie games ever, a perfect storm of cultural references, great soundtrack, 8 bit gameplay and RPG features that end up as non sequiturs. If you like em weird and brilliant, do give it a try, it's free.

Strictly Necessary Cookie should be enabled at all times so that we can save your preferences for cookie settings.

If you disable this cookie, we will not be able to save your preferences. This means that every time you visit this website you will need to enable or disable cookies again.