Indie Game of the Week – Don’t Open the Doors 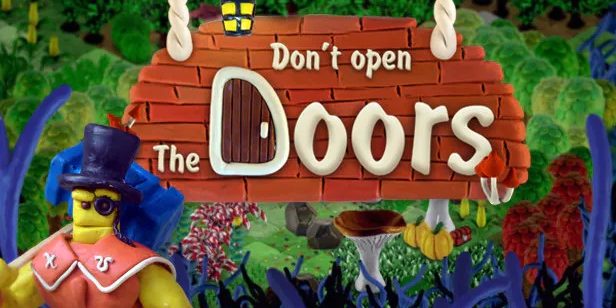 I’ve always had a soft spot for claymation, the animation technique that uses stop motion and clay, especially since it seems to be synonymous with “weirdness”. In cinema, one of the master of claymation is Jan Svankmajer, in gaming most people think about The Neverhood, but honestly there have been other lesser known but equally peculiarly designed adventure games like The Dark Eye and, more recently, The Dream Machine.
Don’t Open the Doors is one of the few plasticine-made isometric action adventures with light RPG elements that seems to harken back to the games of the 90s. But is it any good?

Designed by Anton Riot, one man developer who did everything except for the soundtrack, DotD’s claymation took close to 8000 different photos to make and is entirely handcrafted. Somehow, that care and attention seem to translate to the gameplay.
While the design doesn’t try anything new or original, it is a well balanced action adventure with light RPG elements: explore, kill enemies, earn money, buy items, unlock doors and progress through the story.
The dialogues are mostly there for laughs, with hatred filled pumpkins, bugs that go through their boring lives, talking objects and an array of quirky but mostly one dimensional characters. While, for the most part, dialogues flow naturally, some phrases seem to have suffered a bit during translation.
The story is straightforward and the gameplay design is simple, which is not a bad thing per se, unless one is expecting a rich, deep and long adventure, then this is surely not the right game.
While keyboard & mouse combination works fine for an isometric title, it is unfortunately impossible to rebind any of the keys. It is a control scheme that at times brings the gameplay close to that of a hack’n’slash. To be fair, it does really play like a Diablo clone at times, since it is possible to destroy most of the scenario with the hammer, in order to search for useful items or anything of value that can be sold to merchants.

Don’t Open the Doors’ main inspiration for the mix of linear progress and exploration seems to be the tried and true gameplay of Little Big Adventure. Coherently with its status as an homage to 90s classics, the game seems to bring along some of the typical frustrations of DOS titles from the early 90s. But this was not a conscious choice by Anton Riot, instead it’s draconically required that the player adapts to its framework and design in order to progress.
While the difficulty is never really that high, the player has to fully recognize and explore most of the title’s quirks.
The hero’s main attack animation is slow and gets interrupted each time he is hit, thus enemies that melee attack – really most of them – will always have the upper hand. The player has to adapt and overcome the problem by planning ahead and avoiding large numbers of foes.
The worst enemies are the flies, not really because they deal massive amount of damage, but in large number, they can halve the hero’s life in a few seconds. Retreat or bombs are the only viable option when cornered.
Getting the gun lessens the problem somewhat, but doesn’t really solve it, since it is easy to be overwhelmed by a neverending swarm of flies even with an upgraded character. A different design for the enemies or a selection of more effective melee weapons would have gone a long way in making the game less frustrating and more palatable for the general public.
While progress is usually linear, exploring any of the open doors, while apparently not necessary, it is usually required: those brief snippets of more intense aRpg gameplay that await behind them will award the player’s a new ability or an health upgrade. While I recognize the smart choice to transform the repetitive “grinding” into something more captivating, pushing the player to explore some of the doors without being forced to, might have made more sense.

The decision to make Don’t Open the Doors! in plasticine was indeed the right one; it adds a whole lot of personality to what would otherwise be an unremarkable and unnamed world. Along with the weird dialogues and talking objects that seem to be there just to sprout profanity, this definitely feels like a small indie game through and through.
To be fair, it is actually the weirdness of the whole experience that kept me coming back even through some frustrations in the gameplay.
Soundtrack is also pretty coherent with the graphics, a mix of folk and industrial hard rock that, while perhaps not as varied as I’d hope, definitely fits snugly with the world’s eccentricity.
Do not open the Doors succeds in combining a quirky gameworld and a tried and true gameplay with enough variety and challenge. Shame about the little design problems that don’t seem like they are going to be patched anytime soon since Anton is busy on an early access title, also made with clay, Disdoored.
For an 8/10 hour game, DotD does not overstay its welcome and may just what the doctor ordered for many nostalgic players.

This is me just every day basically

I am very excited to present the trailer for my latest game...
🖋️ INSCRYPTION 🖋️

📜 And... if you feel so inclined, you may now inscribe the game upon your Steam wishlist. https://bit.ly/2XQDTRA

Entombed was one great adventure on #c64 and one of the best in the Pendragon series by the Thomas brothers. Did you know that it took 20 years to find out who the developers were? And that Ultimate Play the game later became Rare? #commodore https://bit.ly/entomb1

I tweeted about Spielberg's director chair a while ago and, lo and behold, the great @molleindustria actually ripped footage from the game, creating a real time interactive movie experience. Choose your own favourite level of Tarantino overacting! https://molleindustria.org/directorschoices/

Vidiot by @GZStorm is one of my favourite indie games ever, a perfect storm of cultural references, great soundtrack, 8 bit gameplay and RPG features that end up as non sequiturs. If you like em weird and brilliant, do give it a try, it's free.

Strictly Necessary Cookie should be enabled at all times so that we can save your preferences for cookie settings.

If you disable this cookie, we will not be able to save your preferences. This means that every time you visit this website you will need to enable or disable cookies again.