Indie Game of the Week – Do Not Feed the Monkeys 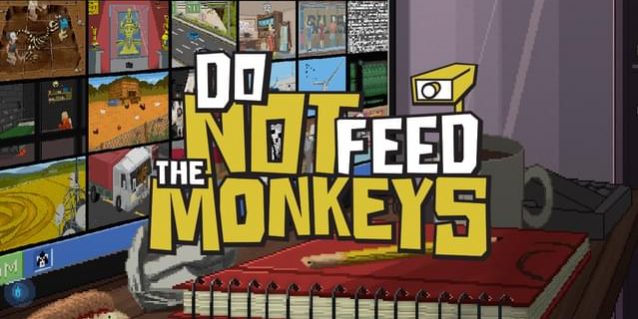 There are have been many examples of games where the player’s input is not essential, especially in the last few years where interactivity has become less and less important. Walking simulators easily come to mind, along with visual novels, even though, in both genres, one is supposed to be reading, clicking along and… well, walking. Do Not Feed The Monkeys’ whole design idea rests on the player not interacting.

It simulates the daily life of a particularly nosy individual that wastes away the day watching screens (well… don’t we all?), noting down if something happens, bound by an agreement to not ever interfere with the lives of the people in the monitors. The screens are provided by a mysterious “big brother” company, who is out to cater to the basic human “need” to mind other folks’ business.

The player has a whole array of choices when interacting with the screens. First, noting down events and “words” related to what is shown on the screen or being said. Connecting the words and finding out “the plot” is the first step towards finding a way to interact with the “monkeys”. While sometimes the results of the deductions will be pretty straightforward, other times not so much, hence the consequences of the player’s actions (or lack thereof) will be pretty unpredictable.

For example, a phone call to the liquor store shown in the screens, may cause the employer to wake up and shoot at the customer, right in front of the camera, even if that wasn’t really what one had in mind. Events happen in real time, but luckily there’s an alarm that blinks, indicating which of the screen is being interested by the events. Meanwhile, the player has to pay rent, buy food and keep well rested, along with buying new screens in keeping up with the organisation’s requirements (hence, a game over if those are not met). Trying to balance work, sleep, money for food/rent and new screens is a big part of the gameplay and, honestly, one I felt could have been designed differently for more interesting results.

Meeting the company’s requirements while not starving or being sleep deprived would have been enough, but it goes a bit overboard, especially with the landlady knocking at the door every three days to ask for money. Luckily, if one wants to play without the time and money pressure, there’s a “Peeper mode” that allows exactly that, a smart design choice on the part of Spanish developers Fictiorama Studios.

The perfect game design is like a good narrative: never gets in the way

While the game design works well enough to stand on its own two legs, it is the attention to detail that makes the gameplay feel unique, even for a potentially repetitive simulation such as this. In every moment of gameplay, it feels exactly like being in the shoes of someone who just wastes away the hours looking at other people’s lives, while waiting for something to happen. The loneliness of the main character is worsened by the ambient sounds reverberating through the dingy apartment: people screaming or having sex, distant records being played.

As I remarked when looking at Hypnospace Outlaw, what I personally would consider excellent game design is creating an experience perfectly suited to the subject matter and befitting the sensations that the player should receive. The subtext of the player doing the opposite of what the agreement stipulates is not really crucial, at least for the better portion of the game: since there are no real consequences, the choice of how/when to interact always rests in the player’s hands. Not interfering with the monkeys may surely cause them to die, kill themselves or, in other cases, escape from the police.

The stories are a bit all over the place, from some that are strictly funny and surreal to more creepy ones featuring nudity, death, murders and rather unpleasant situations. The player is allowed to do both good and evil deeds, even though sometimes, like in real life, “no good deed goes unpunished”. It does really offer something for everyone.
Do Not Feed the Monkeys feels very much like an early 90s DOS game in art design and execution, sometimes I felt some strong Euro vibes like in MAD Tv where one is never sure what use a room may have and the consequences of one’s actions are pretty unpredictable.

The choice to ditch a soundtrack in favor of realistic ambient sounds, along with the graphical style that goes beyond the usual retro 8/16 bit flavours, really caters to my tastes in a way I never expected it to. Everything flows and feels natural, adding to the repetitiveness of the scenario or, perhaps, to the addictiveness, if one is indeed a fan of spying on other people’s lives.

I’ve always maintained that it is easier to find consolation from the drudginess of loud, huge and expensive AAA titles, in the smaller lower stakes indie games, especially those niche concepts that are enriched with fine details and attention. Do not feed the Monkeys is by no means a perfect game and seems to cater only to a specific audience, but that is probably part of the reason why it works as well as it does.

Every run is also randomized allowing one to enjoy many different stories each time, with satyrical tones and social commentary not too obvious and actually kind of subtle. Sometimes it is a bit unclear or obscure what the player is supposed to be observing in order to “progress” through the narrative of each screen, almost wondering into adventure games territory, but I’m sure some people would find it quite fun.

Wasn’t personally expecting much from a digital voyeurism simulator, but Do not Feed the Monkeys plays halfway between the Orwell and Beholder series of games, crafting a sweet niche which may very well lead to addiction.

The game is available on Steam, Apple Store, Play Store and Nintendo’s eShop.

Crowalt: Traces of the Lost Colony – Indie Game of the Week
January 7, 2022